Food For Thought With A Tour of Flatiron City

On Tuesday, September 18th, E-House Residents and ENI students gathered at the historic Flatiron Building located on 84 Peachtree Street in Downtown Atlanta for food and fellowship with the founders of two FlatironCity residents: Land Of A Thousand Hills Coffee and FIGO City Fast Pasta, who both offer a café, that’s open to the downtown community, on the ground floor of the building.

Jonathan David Golden founded Land Of A Thousand Hills, a multimillion-dollar coffee company in Roswell, Georgia that provides a living wage to more than 10,000 Rwandan farmers and their families. The company currently operates five Atlanta locations with four more expected to open in 2019.

Sandro Romagnoli, CEO and Founder of FIGO Pasta, was born and raised in Italy and traveled extensively as International Sales Manager before moving to Atlanta in 1995 and starting FIGO in 2002. With five cafes in the Atlanta area, the restaurant serves over 600 pasta and sauce combinations inspired by their mission to create genuine and delicious meals made in house.

The event took an untraditional turn where students gathered in front of a computer screen for a special opportunity. Golden had coordinated a video chat with two coffee bean farmers located in Rwanda, Africa that provide the beans for Land Of A Thousand Hills coffee. Students had the opportunity to ask questions to gain a global perspective, where they primarily focused on the role of technology in coffee bean farming.

After signing off, Golden and Romagnoli joined the students to share their inspirations and insights as businessowners. Romagnoli began with describing FIGO as a midlife crisis. As he was navigating his career options, he asked himself, “When I have been the happiest in my life?”

He reflected on his experiences carving meat and slicing salmon tableside The George Hotel of Stamford in England, sharing that he that felt happiest when connecting with customers. “Whatever business I pursue, I’m going to be in the business of making people happy,” said Romagnoli, which ultimately inspired the creation of FIGO.

Golden highlighted the importance of translating that inspiration and passion into action. “Start in the mind then take it to the hands and feet,” explained Golden.  He also cautioned students to ask themselves “What’s going on in the environment?” and “What’s going on in my heart?” to find where those interests intersect when developing a business.

“Whether you do it deliberately or not, you’re always networking with people,” said Romagnoli when asked about networking. He shared that in the early stages of his business, a food reporter from the AJC had unexpectedly visited FIGO and left with ecstatic reviews. The following day, a line wrapped around the door! With service at the core of his business, Romagnoli emphasized the importance of curating an enjoyable experience for every customer that walks through the door, every day.

When a student asked the two toughest challenges of running a business, Golden sarcastically answered “1. People and 2. People.” Maintaining both customer and employee relations is tricky for any company, no matter how large or small. Golden shared of a time when he was visiting one of his Land Of A Thousand Hills locations and an employee was 20 minutes late to opening, saying that “There are people are working hard in Rwanda and you can’t even get out of bed on time?” He emphasized the importance of balancing empathy with intolerable employee behavior.

The event concluded with a tour of FlatironCity. Established in 1897, what now stands as the city’s oldest skyscraper is home to over 20 startups. The Flatiron Building was reinvented as “FlatironCity” in 2017 to serve as a modern space for creators, entrepreneurs and innovation to continue “120 years of entrepreneurial spirt.”

Sonia Sequeira, FlatironCity’s Community Development Manager, described it as “tapping into the shared company” with co-working being central to Flatiron’s focus. Current FlatironCity residents include the Microsoft Innovation Center, Women’s Entrepreneurship Institute and many more.

Thank you again to and FlatironCity for hosting the event in their bright and beautiful space! Be on the lookout for future ENI events at www.eni.gsu.edu 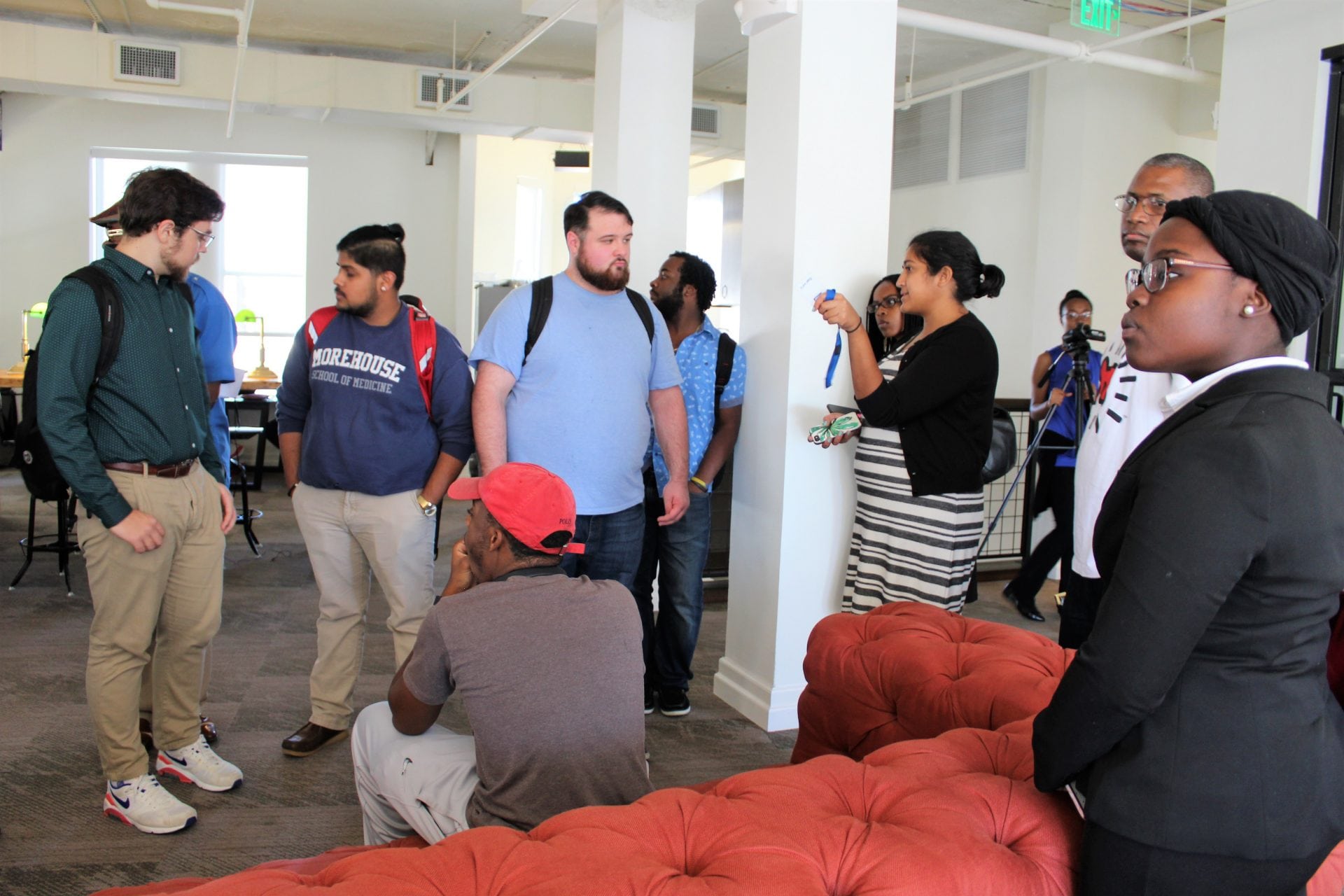 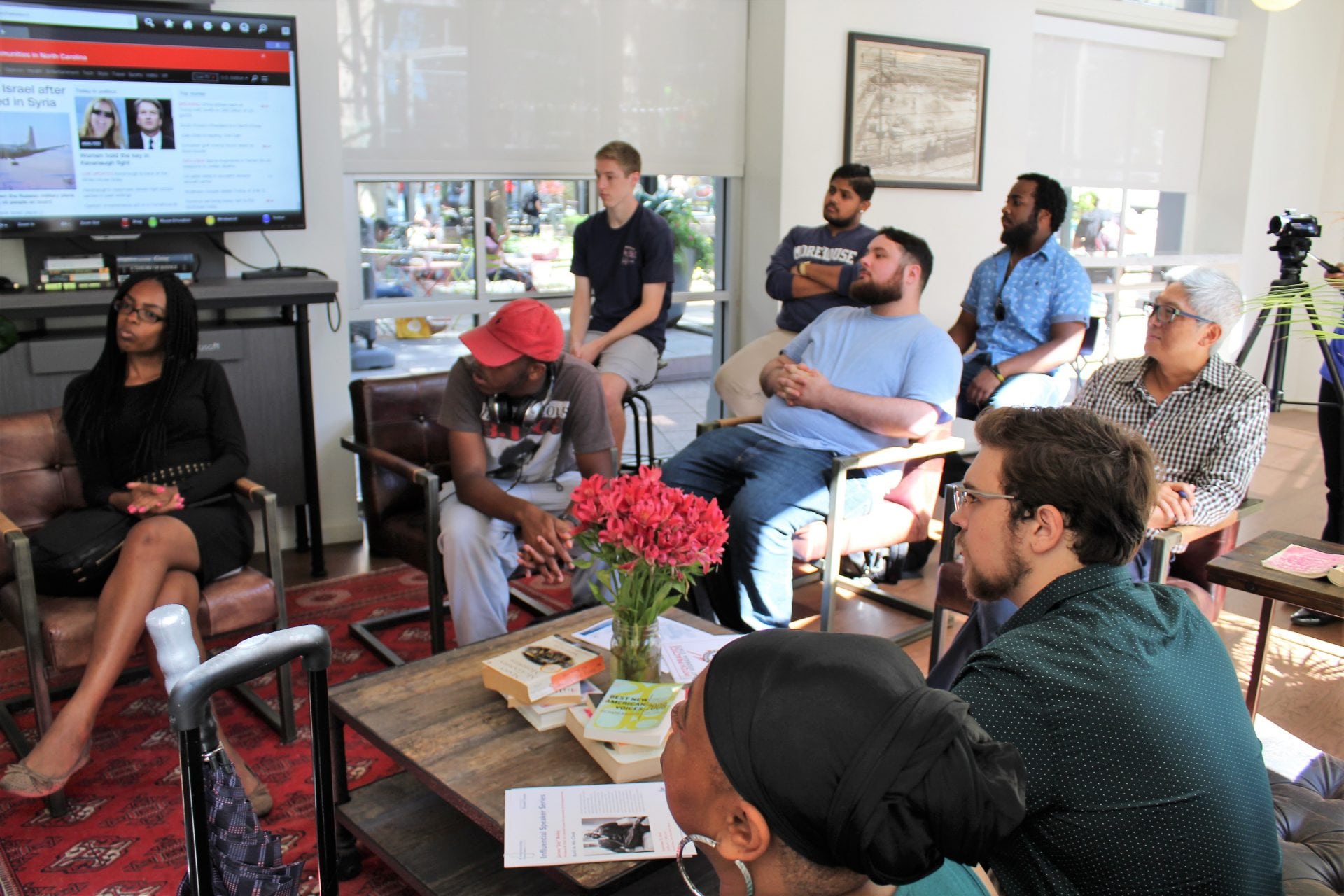 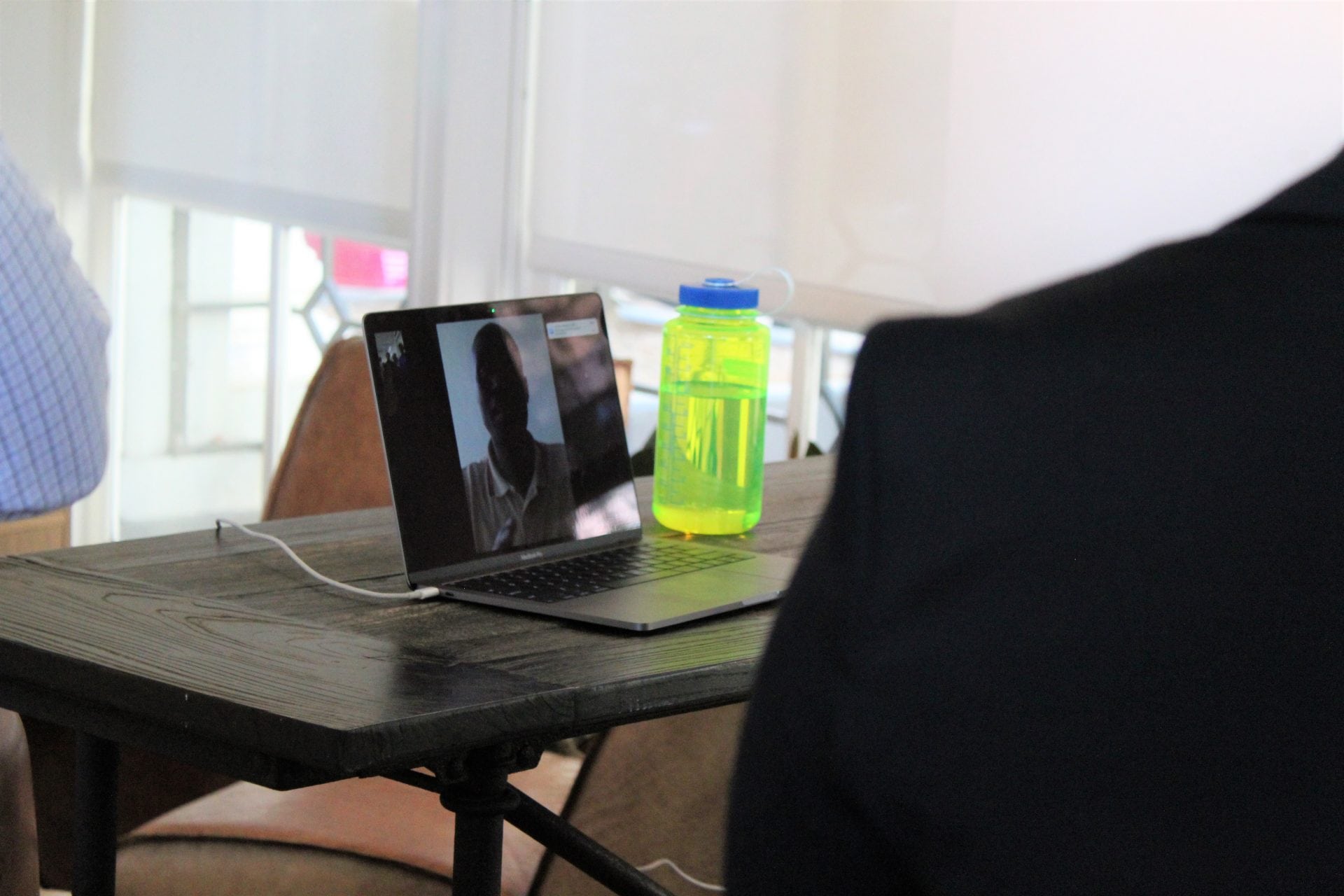 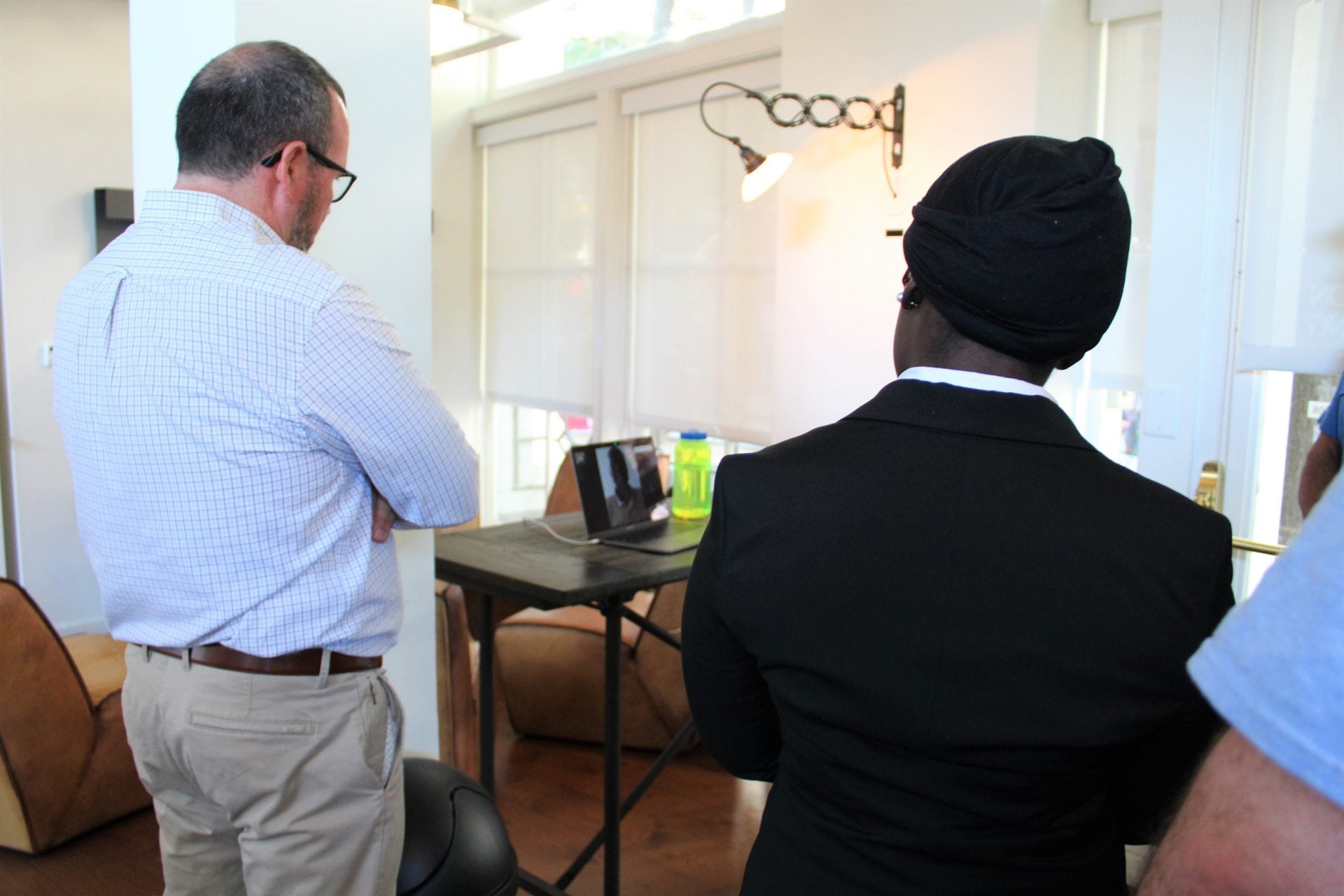 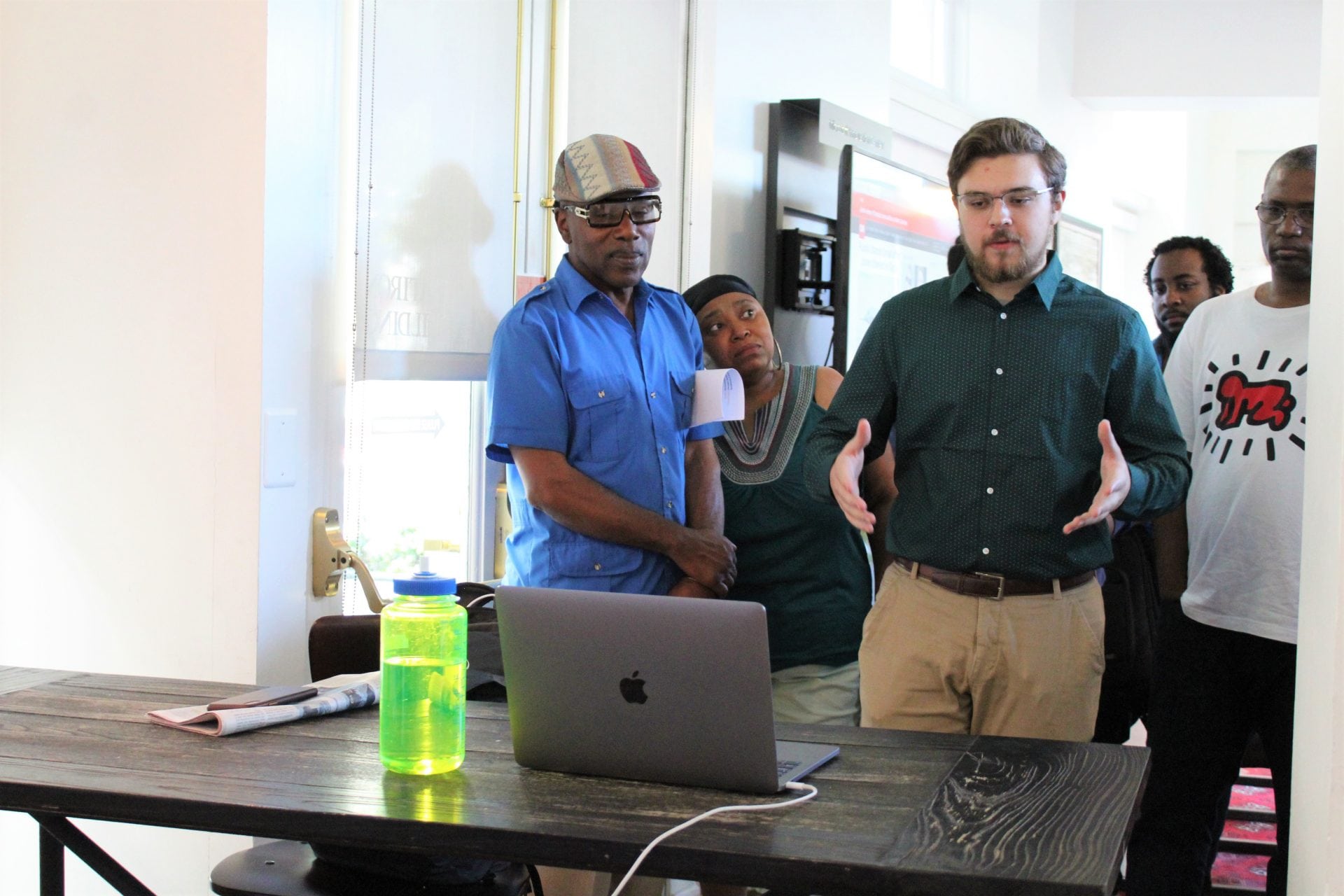 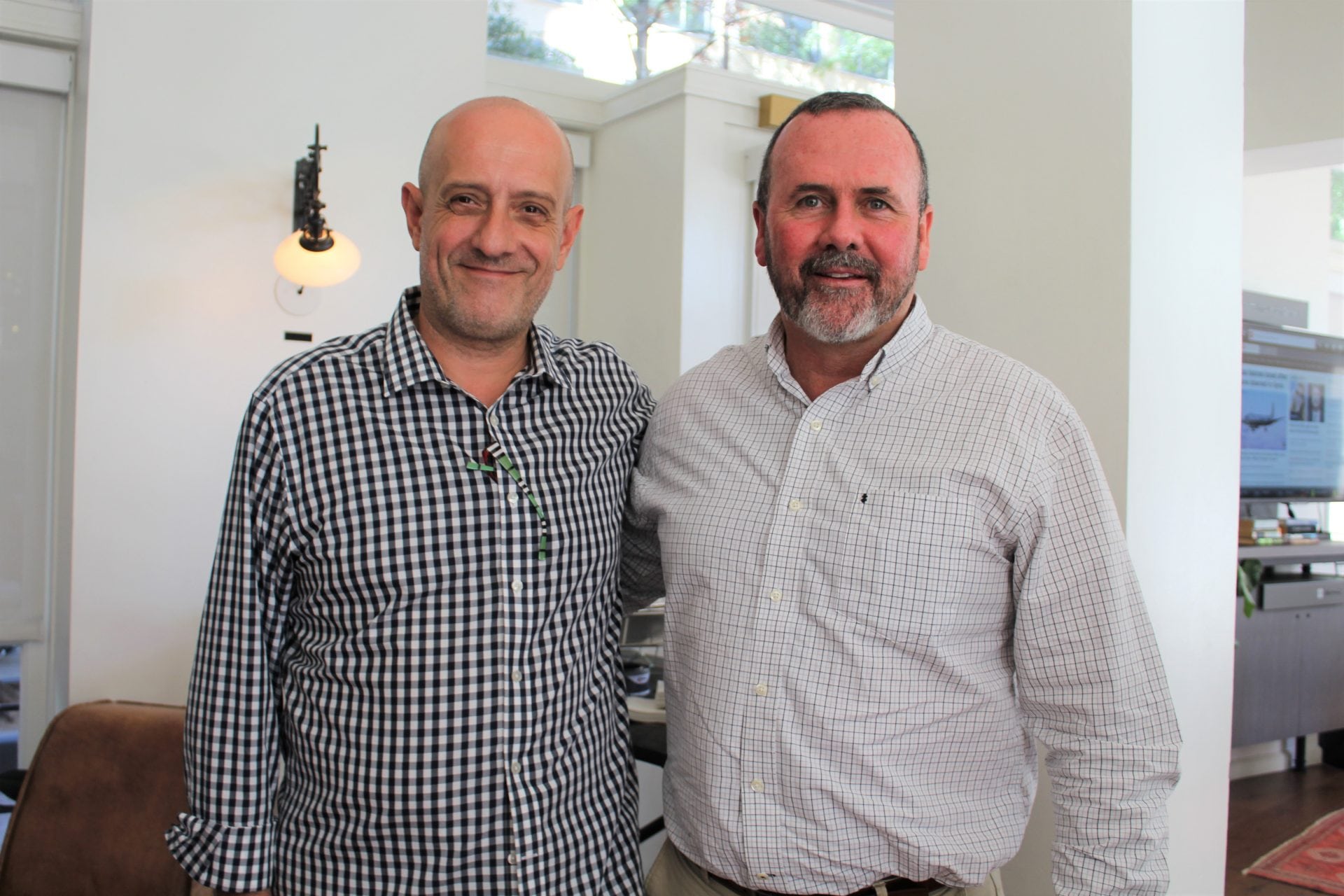 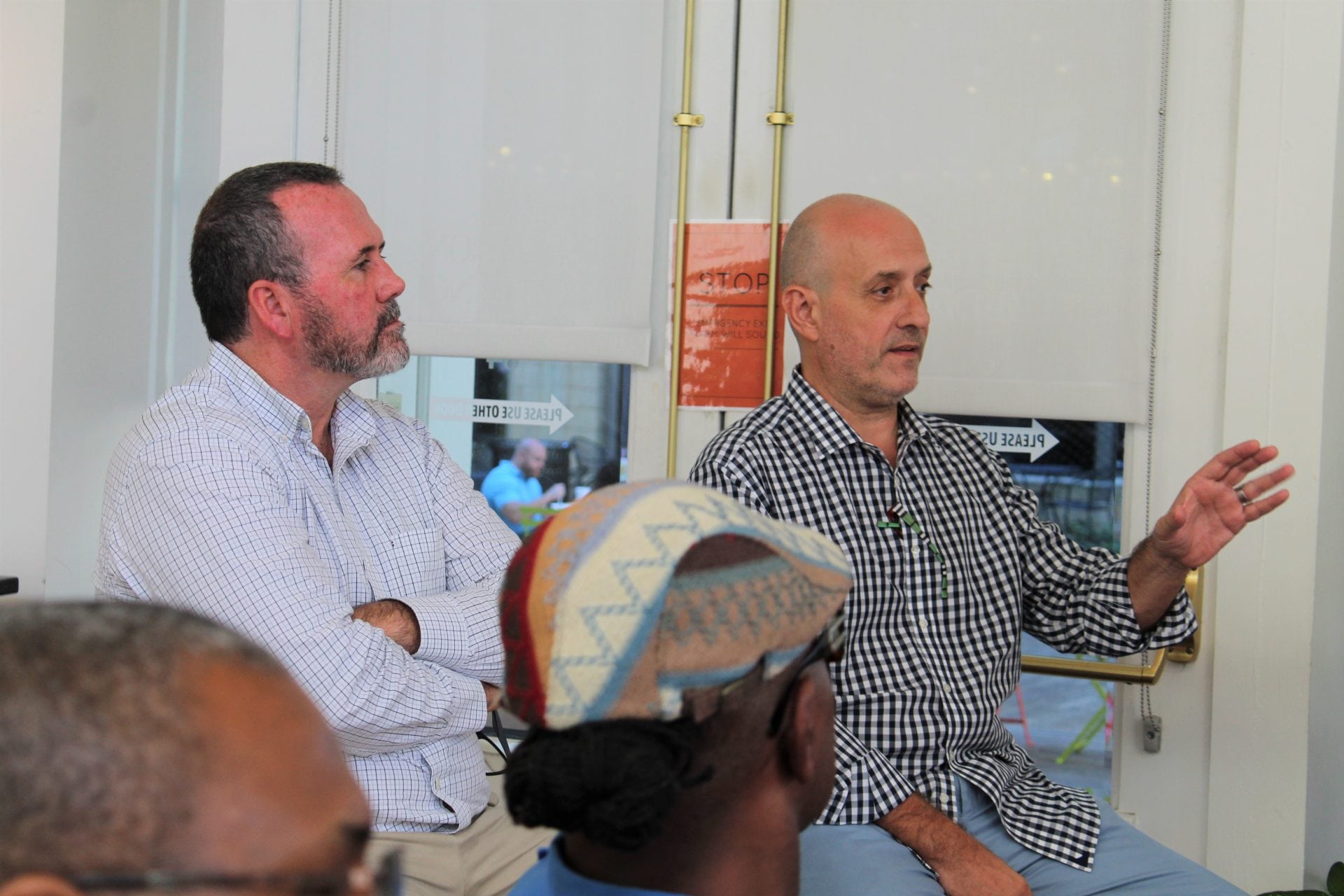 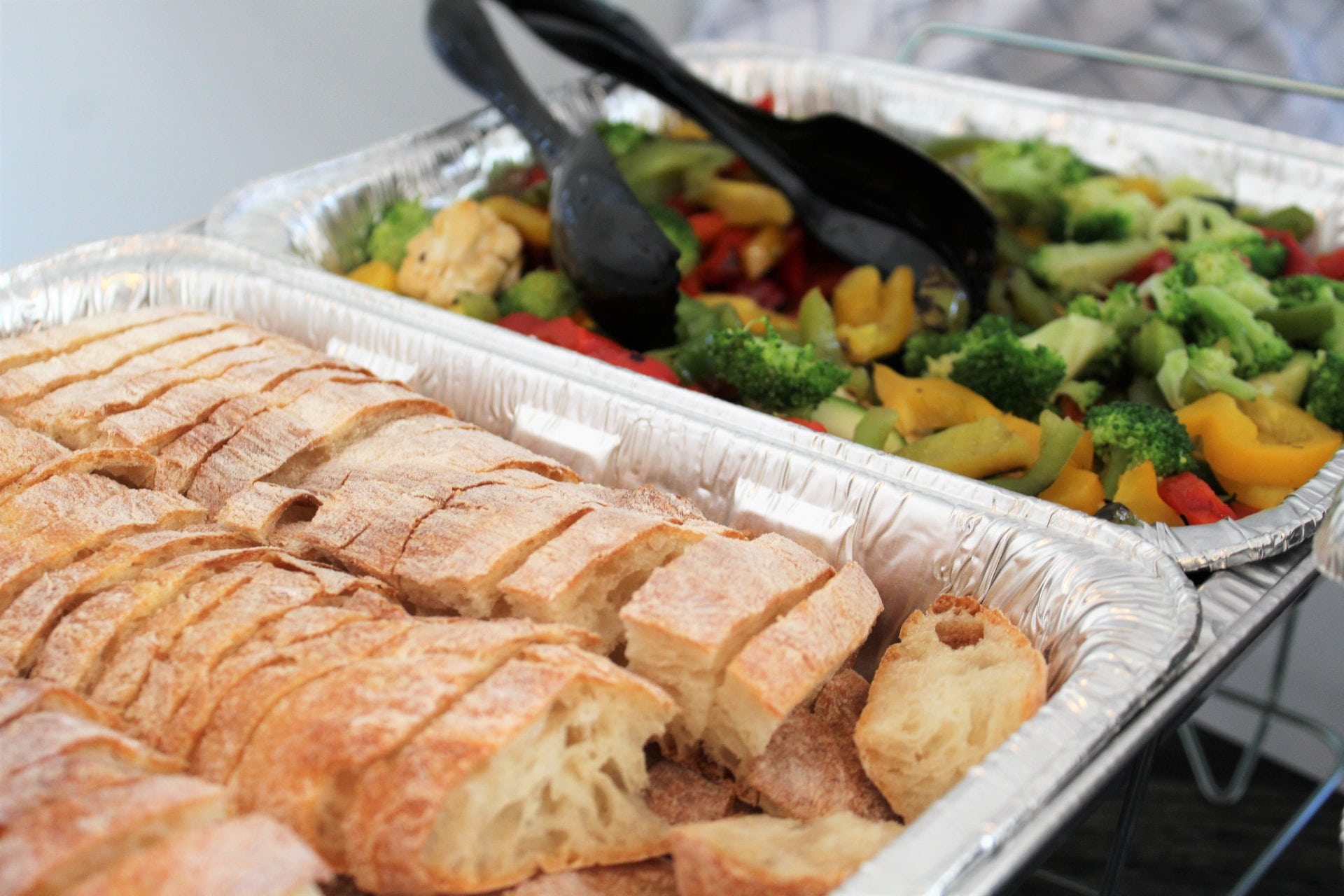 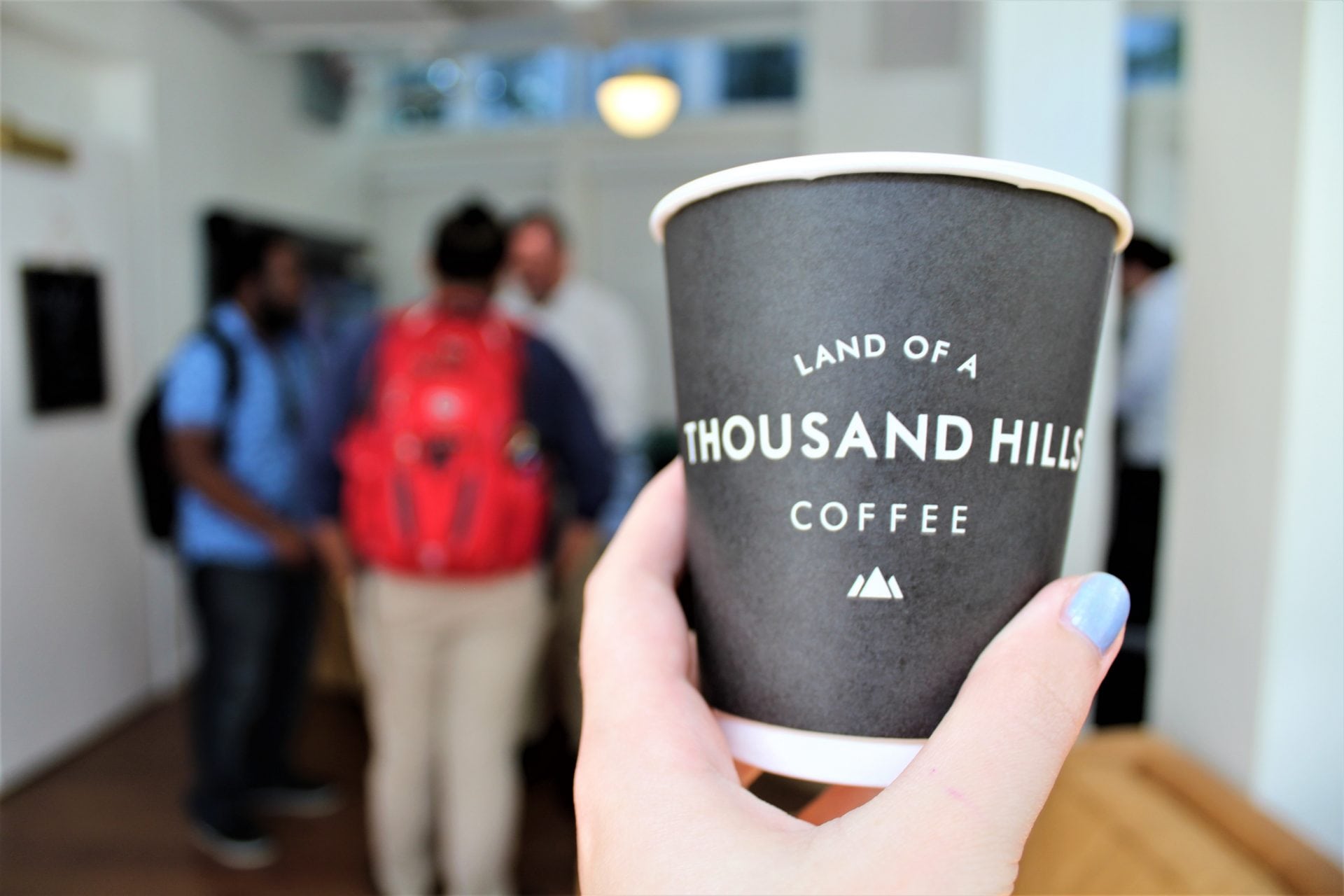 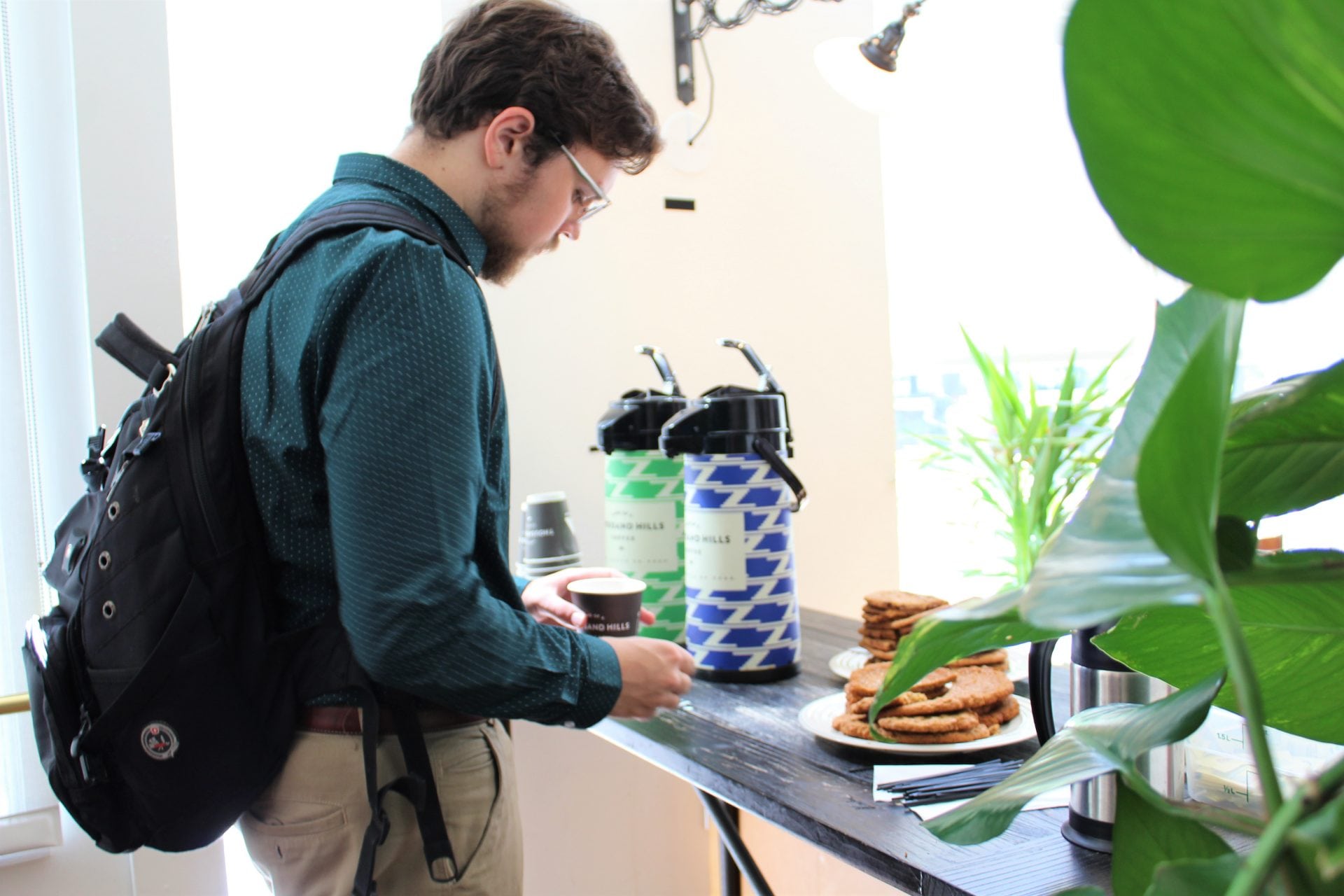 Meet Food For Thought With A Tour of Flatiron City