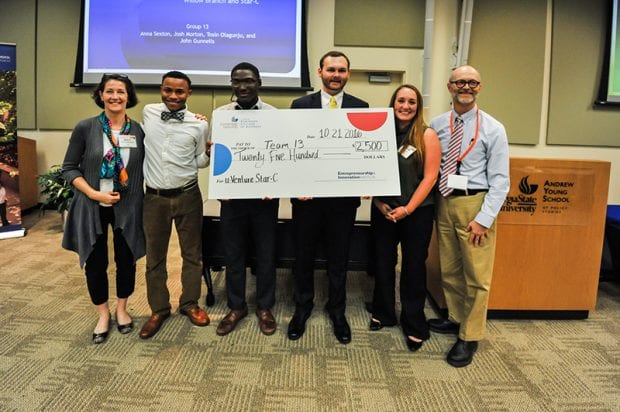 The fall 2016 uVenture Challenge has wrapped up after a long month of hard work and, hopefully, growth among participants. The business model building competition began late September and after four grueling weeks, the winners have been chosen.

The event, hosted by the Entrepreneurship & Innovation Institute (ENI) and the Andrew Young School of Policy Studies (AYSPS), began as students, mentors, judges and spectators piled in the Policy Hub at AYSPS with mixed feelings.

“Some people were nervous, some others were really confident,” said uVenture participant and Master of Global Hospitality student Afi Cakpo. “Some were anxious, but others you could tell they had practiced a lot and were more comfortable.”

As presenters showed up, one thing became clear: not everyone made it through. Many students have busy schedules and the challenges that accompany uVenture are underestimated. For this reason, the teams that made it through had accomplished a feat many had not.

“It’s not just the people who placed first or second who won,” said Dr. Isabelle Monlouis, Robinson College of Business professor and mentor for the uVenture Challenge. “Anyone who had the fortitude and the courage to make it all the way to pitching, they won.”

The competition consisted of several team workshops and accelerators to foster team-building and mentorship. Students would gather in one common place and hash out their ideas with mentors including several professors from both hosting colleges. In these workshops, participants could often find AYSPS professor Chris Markl giving a pep talk and guidance to all attendees, and Michael Jordan of ENI giving a one-on-one coaching session, hoping to guide students in their business model development process.

This particular uVenture Challenge placed students in a different conundrum than the last. Social entrepreneurship is a different ball game than most are used to. It involves more than traditional entrepreneurship by also factoring in a social good. Unlike nonprofit professionals, social entrepreneurs aim to make a profit to attract investors and improve sustainability across the board.
“Most people think of not-for-profits as solely trying to provide social benefits,” said Dr. Monlouis. “In fact, some people have issues thinking that you should even make money out of it at all.”

Despite the odds, the teams prevailed. After having been put in groups of virtual strangers, the teams had a short time to learn one another’s thinking styles, work ethic, and all around personalities before having to present their pitch.

However, Dr. Monlouis insists that all participants who made it through won. “What they won will last longer than any prize money will,” she said.