Robinson celebrates Black History Month 2015 by remembering the contributions of an Atlanta legend. 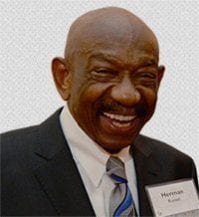 Herman J. Russell passed away on November 15, 2014, leaving behind a lasting impression on not just Atlanta, but the world. Working closely with Dr. Martin Luther King Jr., Russell was an outspoken patron of the Civil Rights Movement, and a business leader who paved the way for future generations. He became the first black member and then later the second black president of the Atlanta Chamber of Commerce.

In 1999 Russell donated a historic gift of $1 million each to Clark Atlanta University, Georgia State University, Morehouse College and Tuskegee University to expand their entrepreneurship programs. The $4 million pledge, announced on November 3, 1999, was the largest gift made by an African American to support entrepreneurship studies in U.S. history. Georgia State put the gift to work by establishing the Herman J. Russell, Sr. International Center for Entrepreneurship in the J. Mack Robinson College of Business to encourage, inspire, and educate today’s and tomorrow’s entrepreneurs to achieve the same levels of success achieved by its benefactor.

Since then, the Russell Center has, among other activities, introduced graduate and undergraduate entrepreneurship studies; held an annual business plan competition; and established a field study program through which students are placed with entrepreneurs.

The Russell Center’s business plan competition is open to all Georgia State University students, and draws dozens of plans each year. Those who compete get their business plan reviewed by business leaders; network with investors, entrepreneurs, and service providers; and gain experience presenting their plans in front of an audience.

“Herman Russell has inspired thousands of students with his career, his success as an entrepreneur, his service to community, and generosity,” said Russell Center associate director Buddy Ray. “I am proud to be affiliated with a center bearing his name.”

“For 15 years, the Russell Center and its programs have made it possible for Georgia State students, alumni and members of the Atlanta business community to connect, learn, teach and promote careers in entrepreneurship,” said Robinson College Dean Richard D. Phillips. “Herman Russell did as much to foster the next generation of entrepreneurs as he did to reshape the Atlanta skyline. What an enduring legacy he leaves.”